A Blast from the Past 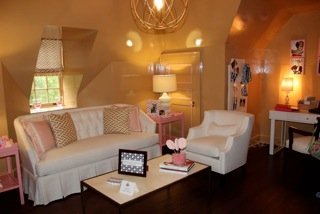 I have always loved the idea of reviving a fabulous grand old house with a kiss of the new, while keeping its old character in tact….one with real history and really good bones. I had hoped this would be a house I could actually live in but alas, not quite there yet! Next best thing, getting to decorate one! Late this spring I got to join some other amazing designers taking part in the Traditional Home Magazine / Greensboro Jr. League Showhouse. We took over the amazing Adamsleigh mansion, just outside of Hight Point – furniture mecca. It is one of those homes truly from another era…with a “prohibition room” in the basement and an iron gate on the second floor landing that the owners installed after the Lindbergh baby was kidnapped, to protect their own brood.

As you can imagine, Traditional Home was able to attract some design icons to work on the house…Suzanne Kasler, Miles Redd, Eric Cohler…to name a few. As was fitting among that company, I was assigned the maids room…at the end of a long hallway on the second floor:)

I attempted to turn this little nook into a modern day study hall and hang out spot for the young lady of the house. Perhaps a bit sophisticated for Justin Bieber karaoke parties, but you are never to young to surround yourself with beautiful design:)

I have to give a quick shout out to some of the wonderful companies that helped me….oomph’s amazing tables and desk, South, Julian Chichester, Quadrille, Kravet and Ro Sham Beau. Thank you!!!

The house will be featured in the October issue of Traditional Home, here is a sneak peak! 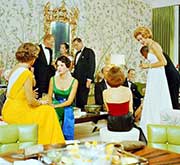 I think I would be hard pressed to find a reason not to celebrate. My husband teases that I like to turn almost anything into a special occasion…the first day of summer, the last day of summer, election day, a perfect score on a spelling test. In my opinion, that is what makes life fun! Why not celebrate the little stuff along with the big. I also love to cook so, to me, entertaining the special people in my life brings together all of my passions, a cozy home that is planned for fun and boisterous living and yummy food to share. By far my favorite way to entertain is to assemble 12 of our closest friends around our much loved antique dining table…it is from the late 1700s and I think it has seen a lot of laughs, raunchy jokes and spilled wine even before we took it over. My inspiration for these nights typically starts with something to die for yummy that I have seen on Food Network or in Bon Appetite and I build a menu around it. I wish I could say I abide by the old cooks adage to never serve something you haven’t cooked before to dinner guests but, with my crazy life, that just isn’t in the cards. So my friends are my guinea pigs. With a good playlist humming, Spoitfy Beach Music or Four Seasons are my preferred jam, we start with apps and cocktails, which with good friends can linger past dinner time. With guests well served before we take our seats, I cross my fingers that all has turned out as I planned, but have pizza hut on speed dial just in case! The mark of a good party is guests lingering around the table for another glass of wine and forgetting about the babysitter bill racking up at home. This is why I have, and I make sure all of my clients have comfy dining chairs! Although intimate dinner parties are my favorites I love a tailgate party, a costume party, a cocktail party, Christmas teas, Oscar affairs and I am even one of those crazy moms who loves to plan birthday parties. Here are some of my favorites fetes and the details that make them special. I hope they will inspire you to invite your friends and family over for Groundhog Day and celebrate! Continue Reading...